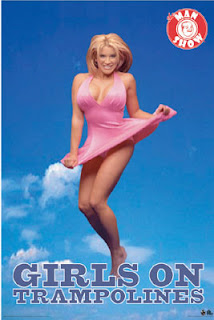 Well, the Olympics have been a lot of fun to watch. I hung out with my dad last night for a bit, heard stories about storms during the Sturgis Rally, and in the past 24 hours or so, I have seen the USA women's beach volleyball team of May-Treanor/Walsh (107 consecutive wins now) take on the Brazilian beach volleyball team (hotchuma hotchuma), the USA women's indoor volleyball team take on the Italian indoor team (bellisima bellisima), and I be damned if there wasn't an Olympic sport called Women's Trampoline…straight out of a fellow pervert's fantasy. Though it wasn't quite as bouncy as expected, it was still an extremely hot surprise. Can't wait for tonight's Women's Mud Wrestling finals. Still think it's a little weird that Trampoline is a sport…but they're taking baseball and softball off the Olympic events because the USA wins soooooo easily every time. I mean…wasn't basketball pretty much the same thing up until the last decade? Are we just going to eliminate all national sports from the Olympics? Good bye hockey. Good bye soccer (not to be confused with REAL football). Good bye volleyball (Sri Lanka's). Good bye table tennis (host nation China). Even basketball would be gone thanks to Lithuania. By the way, did you know that Buzkashi is the national sport of Afghanistan? All this time I thought it was some kind of Japanese sex act…but apparently it's like polo. Anyway, you'll never know now…because it's a national sport…and therefore not part of the Olympics. Just makes more room for new sporting events like Channel Surfing, Madden 2012, Dance Dance Revolution, Blogging (I think I could medal in that one), Texting, Binge Eating, Binge Drinking, Sleeping, Rochambeau, Purple Nurple, Yo Mama, Quarters, Beer Pong, Head butting, Thunderdome, Ship's Mast (if muscle cars are allowed in), Stripping, Staring (also a possible medaling event for me), and Fornicating, the ultimate spectator sport.


Anyway, glad to be interested in the Olympics for the time being…except I think the events where judges are involved are absolutely rigged. I could say that I don't understand the criteria and all of that…but having watched the events for the better part of my life, I know a little bit…and what I know isn't being adhered to. I'd hate to say Conspiracy of the Day - The Olympics are Rigged…but it's pretty much common knowledge, not really a conspiracy. That's why I prefer to watch the timed events…and see the USA dominating most of those (thanks to Phelps & the 400 meter hurdles sweep). Good times. I even watched Table Tennis…and Fencing. Even that was interesting…because it's the Olympics. 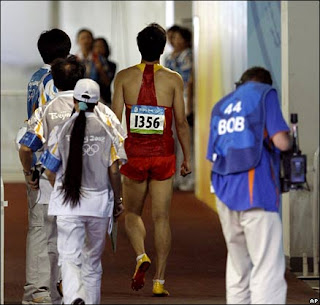 Agony of Defeat - Liu Xiang is a national treasure of the People's Republic of China. In 2004, he became the first Chinese track & field athlete to win a Gold Medal when he won the 110 meter hurdles. He also won that event in the 2007 World Championships. He tried to live up to the expectations of a nation of 1.3 billion proud people...and of sponsors that include Coca-Cola and Visa. He has all the trappings of modern celebrity, rivaled among Chinese athletes only by Houston Rockets center Yao Ming. Liu croons in a music video, appears in TV commercials and looks down on China's streets from billboards bearing his image in a leather jacket for Cadillac and running gear for Nike. This is a man whose legs were insured for about $13 million…or roughly a penny from each Chinese citizen (Take that, Tina Turner). Sunday was the running of his event, the 400 meter hurdles…but he had suffered from a hamstring / Achilles tendon injury for some time. It had forced him to pull out of several meets over the last few months, appear in public rarely, and train in seclusion to try and overcome it. He took the field…but it was obviously that something was very wrong and he was in agonizing pain…but the nation of 1.3 billion was behind him. He had to show up. The 110-meter hurdles final was expected to be one of the highlights of these Olympics: China's Liu vs. Cuba's Dayron Robles, the man who broke Liu's world record in June — with a packed house ready to cheer on their man. Unfortunately, after a false start, it became evident that he couldn't do it…and he walked away in grimacing torture…and countrymen walked out of the stands, disappointed with their fallen hero. Is that some cold stuff or what? My heart goes out to Liu. To train so hard and for so long, be a national icon, be under such extreme pressure, and then…not sure exactly what but probably just roll an ankle or something…and it's all over. Shame to those people who walked out on him in the stands though…unless they were walking down to help him out. That's the only excuse. 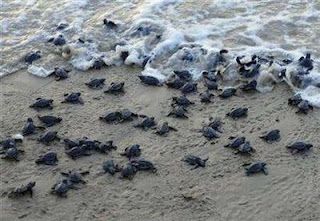 Today's Special: Turtle Soup - As many of my fellow nature nerds know, every year when the sea turtles bury their little hatchlings on the sandy shores of the tropical seas, they face many challenges. The little turtle squirtles are alone, surrounded by natural predators, rough seas, tourists, and have really nothing other than an instinctual pull towards the light of a full moon to drive them to the relative safety of the ocean. However, with the development of those white-sandy beaches, light pollution causes problems with their genetic GPS. In the southern Italian region of Calabria, about 60 newly hatched sea turtles lost their way during their ritual passage to the sea and marched into an Italian restaurant instead. The baby turtles, which ended up under the tables of startled diners at the beachside restaurant, were probably thrown off track and lured by the eatery's bright lights. Antonio Colucci of the WWF (World Wide Fund for Nature, not a wrassler) said, "They saw the artificial lights and took the wrong route. The diners were at first quite curious and then someone alerted the coastal authorities." Luckily these little hatchlings were saved and sent back out to sea…instead of becoming part of the menu. I hear they're delicious…and not just the chocolaty ones with caramel in the middle. 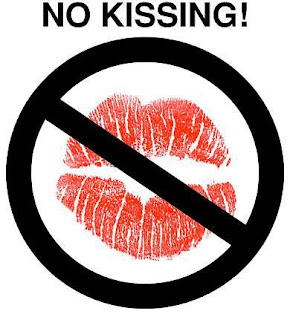 More Odd Italian News - Emboldened by a nationwide crackdown on crime and a government decree giving them extra law-and-order powers, Italian mayors have issued a string of often bizarre by-laws to enhance "public decorum." For example, when on the isle of Capri, don't wander off the beach in a bikini. If you go to the sea in Eraclea, near Venice, remember that building sandcastles is forbidden. Don't even think about mowing your lawn on the weekend in Forte dei Marmi (ah schucks…but wait, when can I do it then?). PDA's (Public Displays of Affection) in a car can earn you a fine of up to 500 euros ($745) in Eboli (not to be confused with Ebola). Feeding pigeons is off-limits in the centre of Lucca. In Novara groups of more than two people are forbidden from lounging around in parks at night. Italian newspapers have dubbed this year's holiday season "the summer of bans." This week though, one town hall was forced to acknowledge things may have gone too far. Rodrigo Piccoli, 33, called national radio to protest after he was fined 50 euros for lying down in a park in the northern city of Vicenza to read a book. The mayor has since promised to drop the ban. Which begs the question, if you had absolute power, what kind of laws would you pass in your land? Here are some possible laws for the Land of $tevonia (flag still pending from the Ultimate Challenge):

This is just a small sampling of some of the laws that some would call absurd…but why not? If you have any better ideas, I'd love to hear them. Who knows? You may be bestowed with the title of Lawmaker in the Land of $tevonia.


I guess that'll do it for today. Called the dental hygienist earlier today…but have yet to hear back from her. We shall see how that goes. In the meantime, no real plans for tonight…but I'm sure the Olympics will be involved. Have a great day everybody!!!
Posted by $teve at 12:54 PM