Laugh & the World Laughs With You

Yesterday, I celebrated my day off by...well, not doing much. I got my hair cut (by a very cute girl) but I wasn't particularly charming or anything...this time. She just seemed to have other things on her mind, which is a little unnerving when she has a set of shears inches from my skull, but still she did a pretty good job. Maybe she was just really focused on the task at hand. Yeah, we'll go with that. The thing is, with a service job like that, you have to enjoy what you do...otherwise it feels too much...like work. If I wasn't having fun and surrounded by great people at my job, I'd probably be sending letters in the mail using print cut from various magazines containing phrases like "biggest fan", "so it says in the prophecy", and "no cops, no funny stuff" to random people, just to see how they'd react. Long story short, I'd go crazy. The thing is that you'll probably notice that most of the places that you'll go to for...haircuts, food, all those services are either really inexpensive or you feel a personal bond with the people working there. You're engaged with them. That's why they ask you about your day...or are extremely polite. It's really cool when they're both inexpensive and friendly because it just makes it easier. Anyway, so I got my haircut. Thanks for noticing...nobody.

I got the haircut because I meet with the management board on Tuesday so I have to make sure that I look my best...or at least my usual well-kept sexy self...but even before that, I have a date tomorrow for lunch with a dental hygienist. Yeah, she called back and I'm taking her to the Athenian on Historic 25th Street in Ogden. It's good Greek food. I figure lunch was good because it's convenient...and if she can't stand the likes of me, we can just part ways in broad daylight. I'll let you know how it goes though. Still no word back from Porsia (sister-in-law's referral) since last week...and Mrs. Wingman called me before my haircut yesterday to say that she's found somebody for me...but she's in Cedar City. You'd think that I'd be an extremely popular guy since my friends & family think so highly of me, right? Anyway, wish me luck. 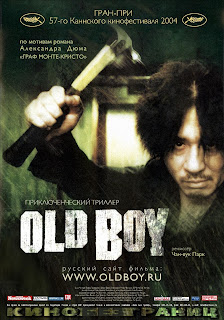 After the haircut, I watched a movie that was recommended to me a while ago called "Oldboy." It's a Korean movie...and basically it's like the Count of Monte Cristo with subtitles...but it's actually a pretty good movie too. The story goes...a man is imprisoned in some kind of maximum-security apartment for fifteen years for a reason unbeknownst to him. He hasn't led the best life...so it could be anybody. For fifteen years, he slowly but surely goes a little crazy...as would anybody. Then he breaks out and tries to piece his life together...but realizes that the mystery man that imprisoned him is still keeping tabs on him. Throw in some hypnosis, a hot young sushi chef, some wicked somewhat realistic action scenes, play on perception, vengeance, a few humorous moments to keep it from being completely depressing, a few philosophical moments, and in the end you have a gritty, entertaining movie that comes highly recommended by Quentin Tarantino himself. I would highly recommend it too. It's worth a gander as long as you can watch a movie AND read subtitles simultaneously.

The Rock Band Party last night was pretty good. Filly & Lilie (new name of Lilith Fair rock band?) stopped by and we had a groovy time. Though it was just the three of us, we were able to do all four parts because we took turns being lead singer while playing instruments. Why? Because we rock...hard. How? Five brownie points if you can figure out how we held the microphones by our mouths without aid of a mic stand and our hands occupied. Filly was kind enough to give me...I think a gallon of Evan Williams Sour Mash Whiskey. Many thanks. 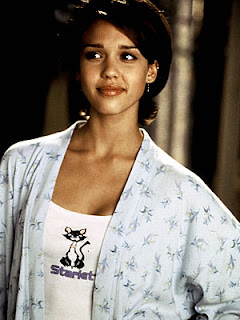 After Lilie left, Filly was in no condition to drive (don't shoot whiskey on an empty stomach) so we watched "Idle Hands" starring Devon Sawa, Seth Green, Vivica Fox, and Jessica Alba. Now, I had never seen this movie...but it was actually pretty good for a stupid horror comedy. There were some hilarious moments...and Jessica Alba in jammies & an angel costume. I remember seeing a hot girl in the previews back when this first came out...but yeah, no idea it was Dark Angel. Oh, so yeah, the movie's about a stoner named Anton (Sawa) who lives in Bolan, California where there's a murderer on the loose. Meanwhile, a mercenary nun (Fox) is just leaving Beaver, UT on the trail of...SATAN!!! Anyway, all Anton does is hang with his stoner buddies (Green & another dude) and dream of talking to his superhot neighbor (Alba). As the saying goes, "Idle Hands are the Devil's Playground" so apparently his right hand is possessed by SATAN and kills his parents, stoner buddies, neighbors, and anybody else in his way...though he tries his best to stop it. Oh...and his stoner buddies come back to life as the comic relief zombies. Did I mention that Jessica Alba's really hot? Because that's kind of important and saves this movie...and if you can laugh at the absolute absurdity of the movie. I'd say check it out if you laugh at horror movies. I do...even when it's not intended. 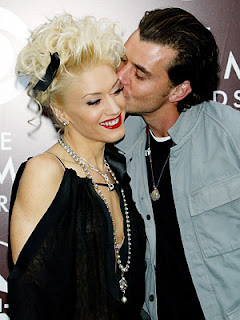 Baby Name Update - Gwen Stefani & Gavin Rossdale had their baby yesterday, a beautiful (I'm assuming) 8 pound, 5 ounce baby boy...permanently stricken with the name Zuma Nesta Rock. Now, I like Gwen Stefani (even though I don't think she's particularly hot...just fairly talented and her music's as catchy as the clap) and I love Bush (the band and the colloquialism, not the Presidents) but why...oh WHY would you name your son Zuma Nesta Rock? Did Zima sound a little too feminine? Is the baby daddy Kid Rock...or THE Rock? Not really sure where Nesta would even come from...but why? Please explain it to me. It'll be good practice for when he turns five and asks, "So...did you lose a bet or something, mommy? Is it some kind of inside joke?" Anyway, congratulations on your lovely baby boy!!!
Well, I've got a few hours of work today...then I'm picking my mom up at the airport and we're going to her big birthday party. I'm not going to drink a whole lot...because I've got a lunch date "bright and early" the next day. Good times. Other than that, not much else going on...except apparently everybody's getting laid but me...but that's the usual. (Sigh...) Oh well, that'll change when the time is right and I find that awesome girl that completes me...or I run into somebody down on their luck and looking for a good lay...or that Brazilian Mail Order Bride company drops their prices by about 60% and extend their warranty to five years instead of two. Who knows? Maybe this hygienist will pick up what I'm throwing down and it'll be the start of something radical. Wish me luck, huh? Have a great day everybody!!!
Posted by $teve at 10:49 AM

"Idle Hands" sounds like a good/bad movie... lol
Good luck with your date!

Thanks. Last minute update...it might be TWO dates back-to-back. I must be a serious poonani magnet or something all of a sudden. :)

Yeah, check Idle Hands out. Worst case, you lose 90 minutes of your life. :)