See Ya at Mardi Gras

Good Afternoon Ladies & Gentlemen,
It's official. I'm going to Mardi Gras in New Orleans in about three weeks. This will be my fifth trip to the Big Easy…and another groovy thing is…my mom might be coming with me. Now, I talked with her last night…and she of course really wants to go because it'll be fun and it'd be with her favorite son…but she's hesitant because…any guesses? Somebody has to watch the grandbabies. Yup, she can't go have fun…because she has to be responsible for them. God forbid the parents should watch their own damn kids. I mean, yeah my brother works…about thirty hours a week…and my sister-in-law…well, nobody knows what the f**k she's doing besides being a little crazy (just trust me on that one) and so my mom has to take care of them. It just isn't fair to her…but whatever. I understand that she wants the best for those kids. We all do. Who am I to say she's getting taken advantage of? On a daily basis? If she decides to stay in Utah, then I'll just have fun without her…and I'll be sure to call her and let her know how much fun I'm having…and send her pictures…and yeah, she'll probably have Kairi talk on the phone and sing "Twinkle Twinkle Little Star" and say how much she misses me…while I'm holding back those last two shots of Jaeger. "Aaah, thank you sweetie. I mi (little reflux that you can taste the Hurricane you drank an hour ago) I miss you too. Could you (again) put grandma back on the phone?" "Okay, love you $tevie." "I love you too." Mom gets on the phone, "Hello?" "That's cheating. I'm still mad you're not here with me."

Anyway, that's a worst case scenario…and frankly, it's not that bad of a worst case. It still involves me partying it up in the Big Easy and experiencing something that many people dream of doing but few get to experience…like going to the Super Bowl or something. It's all good though…because she just found out today that she'll be in Cheyenne in early March with work. How is being in Cheyenne possibly a good thing? Because she's an hour's drive from Denver…and she has no problem with hanging out the weekend before or after or any nights she wants to hang with her favorite instead of stay in some hotel room at the Bates Motel. Anyway, here's some news... 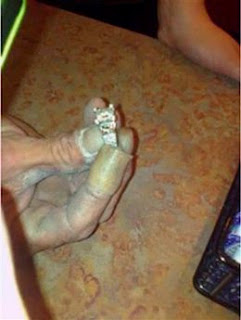 New Game Show Idea: What's in the Crapper? - At the Black Bear Diner in Arizona, it took a plumber to retrieve a woman's 7-carat diamond ring after city workers failed in efforts to flush the gem out of the pipes of a restaurant toilet. The $70,000 wedding ring fell from Allison Berry's hand when she flushed the toilet in the restroom on January 14th. The ring plopped in and the water whisked it away. City workers opened a pipe outside the restaurant and continuously flushed the toilet, hoping to push the ring out to the opening. When that didn't work, the city called the office in suburban Tempe of Mr. Rooter, a plumbing services franchise based in Waco, Texas. "This is going to be like dredging for a treasure chest in the ocean," Mike Roberts, general manager of Mr. Rooter, said at the time. Roberts guided a tiny video camera into the pipe with an infrared light attached. He eventually spotted the ring just 3 feet down and 5 feet over from where it was flushed. Then it took 90 minutes of jackhammering and pipe removal before Roberts and a technician could recover the ring, eight hours after it fell in the toilet. "They always say diamonds are a girl's best friend. In this case, a plumber is a girl's best friend," Roberts said. "She was just so excited, she had tears in her eyes. She gave us a hug and said 'Thank you so much." The Mr. Rooter bill came to $5,200 and the city's bill was $1,000. Berry, of Eureka, Calif., and her husband also tipped Roberts and the technician $400 each and gave $200 to a diner employee for staying late. I'm certain that Allison's next stop was to a jeweler to get the band resized so it doesn't happen again. Anyway, might be a good idea for a new gross-out game show like Fear Factor, where you pick a toilet reach around inside…and you could win a diamond ring…or car keys…or a pack of smokes. The prizes vary. That's the point of the game. It's look older game shows where you choose between three mystery doors…but #2 is always involved. Think that's a bad poop joke? Just wait until you hear host Wink Martindale. Whacking Causes Cancer? - A new study finds men who are sexually active in their 20s and 30s are more likely to develop prostate cancer - especially if they masturbate frequently. The message, perhaps: Hold off until middle age. The study also found that frequent sexual activity in a man's 40s appears to have little effect and even small levels of sexual activity in a man's 50s could offer protection from the disease. Most of the differences were attributed to masturbation rather than sexual intercourse. The study, led by the University of Nottingham, looked at the sexual practices of more than 431 men who had been diagnosed with prostate cancer before the age of 60, together with 409 controls who do not have prostate cancer. Among men with prostate cancer, 34 percent had masturbated frequently in their 20s, compared to 24 percent among the control group. A similar spread was found for men in their 30s. The results, based on questionnaires, are detailed in the journal BJU International (the British Journal of Urology). The prostate gland secretes a milky fluid that mixes with sperm and seminal vesicle fluid to become semen. Prostate cancer is the second leading cause of cancer deaths among men in the United States, after lung cancer, according to the Centers for Disease Control and Prevention. About 30,000 die from it each year. "We were keen to look at the links between sexual activity and younger men as a lot of prostate cancer studies focus on older men as the disease is more prevalent in men over 50," said lead author Polyxeni Dimitropoulou (if that is his real name), who is now at the University of Cambridge. "Hormones appear to play a key role in prostate cancer and it is very common to treat men with therapy to reduce the hormones thought to stimulate the cancer cells. A man's sex drive is also regulated by his hormone levels, so this study examined the theory that having a high sex drive affects the risk of prostate cancer." Damn it!!! 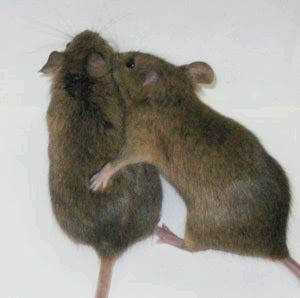 Redundant? - According to a new study, when male mice live with female mice, their reproductive years are extended by up to 20 percent. A similar effect might or might not occur in humans - it has yet to be tested - but the finding has "significant implications for the maintenance of male fertility in wildlife, livestock and even human populations," the researchers say. The scientists housed one group of male mice with females for up to 32 months, while the others were forced to live like monks. Each of the males was placed with a female at two-month intervals to see if they could get the job done. (Hmm, I'm confused scientist. What does that mean exactly?) The males that lived constantly with females stayed fertile for six months longer, on average. The decline in fertility appeared to be due in part to defects in the sperm-production process, the researchers figure. "It appears that housing females with a male mouse delays the decline of reproductive processes at the cellular level by somehow affecting the cells surrounding the stem cells that produce spermatozoa in the testes," said study leader Ralph Brinster at the University of Pennsylvania School of Veterinary Medicine. The finding was detailed this week in the journal Biology of Reproduction. "The effect may occur in any species. One does not know without controlled experiments." And that presents a problem. "It would be extremely difficult, probably impossible, to study directly in humans." ("Hmm, live with some girl I don't know for almost three years…or live like a monk. I've already been doing the latter for…frustrated sigh…where do I sign up?") If this reproductive effect occurs in livestock, it could suggest ways to extend the mating life of males, Brinster said, adding that "this finding may also have relevance for the protection of some large endangered species." Did somebody say pandas? Anyway, so basically…according to this study…if you're around a female, your reproductive years last longer. That's kind of like saying if you live near the ocean, the air's more humid, isn't it? Especially since those that aren't around females are masturbating so much…so prostate cancer cuts down their years. Ladies, please…help us save a few good men out there. Don't be stingy with the poonani. It could save somebody's life. If not, then you just gave that dude full-blown cancer. Sure, if the guy deserves it, whatever…but what about those good guys…like oh I don't know…ME!!! Are you gonna give me cancer? Or are you gonna give me the go-ahead? I come with a money back guarantee.

After that, I think I'll call it a day. Tonight's the Movie Night were Boss Lady K & I are gonna watch "Saw V" on the big screen in the new Cooliseum. She even checked earlier, "Do I need to bring anything?" "Well, I've got a box of popcorn that I haven't used yet, a full bar with Jaeger, Vodka, Tequila, Brandy, Whisky, several Rums, liqueurs and I'm a bachelor so there's always a bag of chips, Goldfish and frozen pizzas as well as an assortment of meat so…bring whatever else you think we need." "Awesome. Ooooooh, Saw!!!" Should be a fun night. Have a great day everybody!!!
Posted by $teve at 3:47 PM