Good Evening Ladies & Gentlemen,
Today was my first day at my new job...and it was a lot to absorb in one sitting. Boss Man J started off the day by introducing me to several hundred people...of which I probably remember about a dozen...but that'll come with time. In fact, one of my coworkers Candy seemed SUPER excited to see me (three cups of coffee?) and gave me a big hug...which was a little awkward (mostly because I'm 6'7" and she's about 4'10") but I'm cool with it. Great bunch of coworkers that I have so far. Nikki helped out Boss Man J by showing me the ropes and going over my duties and some of the rules and stopping by HR to make sure everything's okay and you know, all the usual first day stuff. Good times...and it feels odd to say...but I can't wait until Monday to learn more and do more. So excited about this new job of mine...and this new environment. Oh, I wish you could all feel this mixture of anticipation, anxiety, excitement, living moment to moment, not knowing exactly what's going on...but just enjoying every experience...and it's only been two days. It's weird. It's not home or anything like that yet...but given time, it could be I think. At least for a while.

Last night, I was TOO excited to sleep. I tried to get to bed early so that I could get up early, get a good breakfast, maybe explore the city a bit before getting to work...but that didn't exactly happen. I had a thousand things running through my head and they were all awesome. It was like Christmas morning...only instead of presents I had a job waiting for me. I was also really excited about the different apartments that I checked out yesterday. They were all cycling through my head and I was weighing pros & cons and all while trying to relax and get some shuteye. I was thinking about all my family & friends back home and when I might get to see them or hear from them again. Well, apparently I eventually got to sleep but I woke up feeling like a million bucks, get ready for work, had a hearty breakfast, and went to work. During the day, a lot of people were asking me about where I transferred from, how I like the city, how the apartment search is going, and of course I was more than happy to fill them in on my favorite subject...me. This is how I found that at least three ladies IN MY DEPARTMENT lived in the apartments upstairs which was BY FAR #1 on my list (especially after talking to my parents the night before, talking to friends, and getting suggestions from Pirate Monkey, Lilie, and somebody named James). This got me super duper excited. 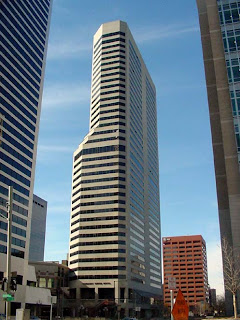 After the day at work (already discussed), I went to the office for the Apartments Denver Place to put my name down for a new apartment. This was it. This was going to be my new crib...in a prestigious highrise overlooking the Denver Skyline in an apartment that was basically perfect for me. Lauren greeted me as I walked in with "It's already been sold." My heart stopped for a moment. "Oh...man." She was having a guy sign papers so she said, "Hey, can I talk to you in a minute? Would you mind just waiting in the lobby while I finish this up?" "Yeah sure." So I sat in the lobby and watched a bunch of slanderous political commercials for about three minutes going over my other options, how my weekend was going to be full of trying to find something comparable, damn it, damn it, damn it. I knew I should've stopped by during my lunch break (by the way, my job gives me lunch...and it's awesome. We had Reubens, macaroni salad and ice cream sandwiches today.)

We went into her office and she said, "Yeah, so that apartment that I showed you yesterday on the 26th floor, we had to move somebody else into there...so it's no longer available." "Oh man, that sucks." "However, we do have the same floor model available...but it's on the 34th floor. Is that going to be okay?" Had to think for a second why that wouldn't be more awesome. She didn't seem to be trying to be sarcastically clever...and being an expert, I think I would know. "Ugh...same floor plan...eight floors higher? Gee, maybe we should go check it out. Just to be safe." She smiled, grabbed her keys, and we went to check it out. Exactly the same room...but a different angle of downtown out the windows. Same offer? Sold!!! We took care of the paperwork...and long story short, I have a six month lease on a great apartment...and if I find that I can't afford downtown living, it's only for six months and I can get more assituated to the city by then. It should be awesome. Big day for me!!!

So yeah, basically with that, over the next week or so I'll be getting the logistics down to move my crap from Utah to Colorado...while learning my new job basically from scratch...and trying to memorize names of hundreds of individuals. Should be a fun time...but at least I've got my apartment situation down, my job's awesome, and my family & friends are more than willing to help me out. In fact, I've been inspired to finally make some changes to the title and format of this blog over the next little while too...and call it something like "The Eclectic Eccentric: Pimpin' on the Ritz" or "Dr. Mookie Love: Pimpin' on the Ritz". Any other thoughts or suggestions? Let me know. In the meantime, I may just turn in a little early today since I didn't get much sleep last night...but we'll see since I'm SOOOO excited about having a high-rise apartment in the heart of a metropolis. Plaaaayaaaaaa...

I still think Electric Boogaloo is the best. Or maybe "Excellent Adventure" a la Bill & Ted.

Or Eclectric Eccentric: Denver Strikes Back

Or Eclectic Eccentric: The Reckoning

Or Eclectic Eccentric: In' Da Hood

Or The Eclectic Eccentric Rides Again

P.S. JL Clyde will leave more (she assisted me with the last couple)

The Electric Eccentric with a Vengeance

The Electric Eccentric II: the Wrath of Mookie

Doctor Mookie and the Prisoner of Arrowhead

The Electric Eccentric and the Denver Crusade

Lord of the Steve: The Ritz Tower

The Eclectic Boogaloo has a nice ring. I also like the Dr Love Free or Die Hard & the Denver Crusade...but there's lots of options.

The Good, the Bad, & the Mookie

Dr. Mookielove: or How I Learned to Stop Worrying and Bomb the Love

The Chronicles of $tevonia: The Love, the Mookie, and the Clothes Scattered all over the Room

Episode II: Attack of the Bones (actually, that'd be a better one for Bone Jr)

Of I really like...the Passion of the $teve

Still though, Pimpin' on the Ritz is just so fitting. I mean...it's all my usual pimpin'...but I'm literally ON the RITZ. Mile high club indeed. :)

I don't want to give any suggestions for your blog title. You're more creative than me anyways.

Just wanted to say how happy I am that you are finally gone ... no, that's not it. I am happy that you like Denver. Even though we never really hung out much, it was always nice and you are a great guy and all.

That apartment building you got into looks really nice too.

Thanks Ruben. You're a cool cat too. You & Erica are always welcome to stop on by...and you can tell us how German beer is so much better than American beer...even microbrews. :)

Congratulations on your ultimate Bachelor pad! Now I really have to come to Denver. :) Have a great weekend! - Lilie