Did I Fall Asleep?

Sorry it's been a while...but I have a pretty good reason. My weekend was pretty awesome. Full of hugs, smiles, junk food, and THREE birthday parties (and another that I had to RSVP No). It started Friday night when JL Clyde came over with her laptop and we watched a few episodes of "Dollhouse", then some of this Simon Pegg show "Spaced" which was okay, and then I somehow got conned into watching an episode of "Glee." Now, I knew going into this...that I wanted nothing to do with it. Musicals, high schools, dancing, teenage drama, just nothing that intrigues me at all (except maybe the cheerleader outfits). Well, it was even worse than I thought it was going to be. Not my cup of tea at all...but luckily it was quickly replaced by images of Eliza Dushku kicking ass in stilettos. Good times.

Saturday, I went to my buddy Isaiah's daughter Seriah's 5th birthday party at Chuck E. Cheese...and my brother & his kids were there too. (P.S. My sister-in-law apparently got fired from her job at Wienerschnitzel in the first week & may have the swine flu...and when I was told that, I laughed for about ten minutes straight) Anyway, I played arcade games with the kids and caught up with some of my friends that were there. I even won a few hundred tickets in the games...which was enough to get a few pieces of Laffy Taffy and a bracelet for my niece. What can I say? I know how to pick out jewelry for the ladies. After the party, my brother had to go to work...and my stepdad had to go sleep (he had been up for almost 3 hours) so I was kind of put into a situation as babysitter for a few hours. It was no problem though because the kids were exhausted from the party, so I put them down for a nap...and watched some of the new season of "It's Always Sunny in Philadelphia" on Comcast On-Demand. Good times. Oh...and get this, my camera was as dead as a doornail so...here are some horrible pictures from my cell phone... 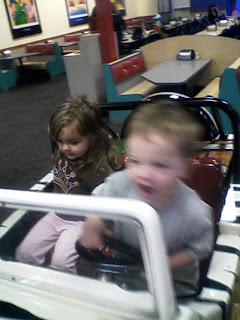 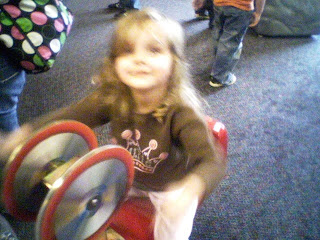 After that, we went to my Uncle Dave's 50th birthday party and do you know what's crazier & more annoying than a bunch of kids at a Chuck E. Cheese? A bunch of redneck kids in a room full of balloons. "Hey mom, if you need anything I'll be outside having a smoke." "You don't smoke." "Yeah well...I just need to get out of this room. Right now." After about an hour there, we went up to my mom's to hang out for the night. We watched "Fern Gully: The Last Rainforest" and then went to bed. The next morning, I was again thrown into the position of involuntary babysitter because my mom left early in the morning to set up my niece's birthday party and my stepdad...was into hour 20 of his slumber. It's hard to feel for the man. I know he hurts sometimes with his fibromyalgia...but it's really hard to feel for him when you ask him to do anything and he'll just try to pawn it off on somebody else...or just not do it. I'm not sure how my mom does it...but then again, she's a kind soul like me. Kairi, Vinny & I had fun though...and then we went to her birthday party...and it was awesome. Here are some pictures...
Okay, I know my phone camera sucks...
but you can tell that these balloons for a kid's party
were probably bought at an adult novelty store, right?
I mean...they were even ribbed on the shaft 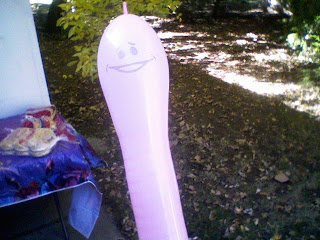 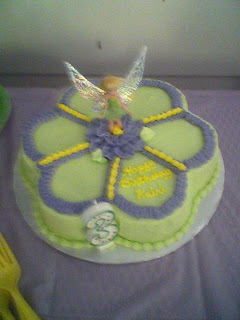 After the party, my brother & I played some Rock Band. Now they have Queen...including the booty anthem "Fat Bottomed Girls" and that's awesome. Then we watched "Monsters vs. Aliens" with the kids...and it was exactly what you would expect from a kids flick. Then it was getting late so I said my goodbyes and went back home to work today. I realize this is really the quick rundown of the weekend & sounds kind of boring...but it really was a lot of fun to spend time with my family & friends. Great weekend.

Monday, I went to work...but that's lame. When I got home though, the Wingman was in town...so instead of watching the Eagles beat the Racists, I hung out with him...and we had fun. Hence why I didn't blog (that and that I didn't really have much to blog about). Tuesday was work again...and again, that was pretty lame...but then that night, instead of the Wingman (who had a sh*tty day thanks to the inequities of the Utah legal system & his b**ch of an ex-wife) taking up my night, my mom was there to hang with. She was in town with work...and wanted nothing more than to hang with her favorite oldest son...and watch "It's Always Sunny In Philadelphia." Go figure.

Today...was more of the same. At work, our email went down all day Tuesday...and when they got it working again, the first email I got back...was from my old job in Denver. Apparently a certain report hadn't been filed in a while (like 6 months maybe?) and they asked me about it. Luckily it was copied to my former bosses so I didn't have to reply with a "Ugh...you b**ches laid me off 6 months ago, that's why it hasn't been done" or something like that. Thought it was funny. Also thought it was funny that the next email back was from JJ...and informing me that she saw that Sylvia Browne...and Montel Williams were coming to town...and she thought of me (because she knows how I feel about Sylvia). Good times. Also, my mom was here again tonight...but she's asleep & snoring now...so I thought I'd blog real quick...since it's only like 11 at night.

Anyway, that's a quick catchup. Halloween's just around the corner and I still have no idea what to be. I'll figure it out though. Same with Tahoe, no real news other than I asked about it earlier today...and they said they may have an update for me by the end of the week (aka two days from now) so we'll see. Glad to be back. Sorry I haven't had more elaborate or entertaining stories to tell...but I've been hanging with those that I Love. You know how it is. When you're hanging with those that you Love, then it's really only entertaining to you most of the time. Bubbles is coming to town this weekend. Maybe I'll get to see her this time. Have a great day everybody!!!
Posted by $teve at 11:25 PM